Pets - They Add So Much To Our Lives

Most of us have pets – dogs, cats, birds, horses, goats, even pigs. They add so much enjoyment to our lives.

I grew up around horses. My Morgan horse, Racal, became my friend and confidant.

Everything in life seemed better when I crawled on his back and went for a ride. I loved sitting in the hay barn, enjoying the smell of hay. I’d pour out my heart to my Rascal as he ate from the manager. I knew he was listening because his ears would move back and forth as I talked. Every once in a while he’d lean up and nuzzle me as if tell me everything will be okay.


I remember my sister telling her daughter, who was scared to be outside by herself, to watch their horses. If everything was fine, they’d be eating and meandering around the pasture. But if someone was out there, their ears would be forward, as if on alert, and she’d know to come into the house and be careful. Wasn’t that insightful of her? After that, my niece never was scared to be outside by herself.

Today my family has a yellow lab. He’s our second one. His name is Shilo, 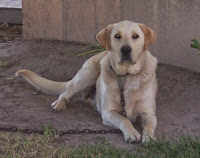 and he’s my buddy. It’s always amazing to me that we can be busy and not play with him for a day or so, but whenever we go out, he’s there, wagging his tail, thrilled to see us.

Our first lab was named Max. My son bought him, then decided to get married and couldn’t keep him. We inherited him and had him for eleven years. He was part of the family. When my husband retired and I was still working full time, Max used to go everywhere with him. They were definitely buddies. It definitely broke our hearts when he died.


My most unique pet was a young turkey. His name became Beep Beep because when he was little, every time we went by the box we had him in, he’d make a chirping sound like Beep Beep. As he got older, we’d call him and he would coming running and follow us around. People used to laugh that we had a pet turkey.

Pets become part of our families, adding happiness, and becoming an integral part of our lives. As I write my stories, you’ll notice that my hero and heroines nearly always have animals in them. A story wouldn’t be real if it didn’t have a dog wagging its tail or a horse wanting to have his neck rubbed. Wouldn’t you agree?