Finally, I can announce that Dark Secrets will be available for order this week. I'm really excited about this story. 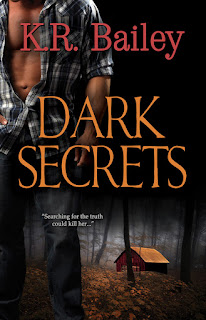 What's it about?
Here's a brief excerpt:


Her fingers tingled when he took her hand and led her onto the dance floor. The heat from his body enveloped her as she slid into his arms. It felt so good nestled against his body. His grasp on her waist was firm.


Electricity arched between them as they danced together, moving as one, her leg between his, her breasts pushed against his muscled chest. His scent surrounded her as she closed her eyes and breathed deep. Beau. She brought his name to her mouth, and it rolled off her tongue like butter.


“I think that blue bottle had some magic potion in it,” she whispered.


“Enjoy.” He smiled and placed a feathered kiss against her forehead.


His lips were soft and left trails of fire on her skin as they traced down her check and to that spot just below her ear. She closed her eyes, relishing his touch as they moved in sync to the slow, sensuous music. Without realizing it, she ran her hand across his shoulders and to that long, curling hair. As she pulled her fingers through it, she heard him groan.


“Wanna get out of here?” His voice was a low growl, and she heard the want – the need – in it. Her heart pounded and she fought to catch her breath at the knowledge that he felt just like she did.


“Okay.” She stepped back, but before she broke contact, he pulled her against him, so close her body was tucked up against him like a tight tee and stretchy jeans. He kissed her. His kiss beckoned for more, and she gasped at its intensity. She met his kiss and dug her fingers into his back with all the passion she held inside. Her heart pounded as he explored her mouth, and all she wanted was more. More of his kisses, more of his touches.


The music stopped, but they remained locked together, lips tasting, opening to allow the warm, moist exploration of tongues dancing.


Someone cleared their throat.


Moira looked up to see three couples watching, grinning at their actions. She ducked her head into Beau’s shoulder, and he led her off the dance floor and to his truck.


The cab surrounded them, making a warm secluded cocoon.


Beau put his key into the ignition, but before he started the truck, he pulled her against him one more time. His lips met her already kiss-swollen ones, and she whimpered with need. They remained pressed against each other. Moira fought to control her breathing and the pounding of her heart.


Beau kissed her once again. His lips lingered. She closed her eyes at the feel of his warm breath against her skin when his mouth slid from her lips down her throat. Her legs quivered at the want of more. Her breath caught at the touch of his lips down her neck.


Cold air whooshed between them as he pulled away and started the truck.


“Hurry,” she urged as they drove away from the pub and into the mountain. Moira marveled at how right it felt being with Beau, holding his hand, their thighs touching, her body trembling with need.


The inky sky lit up like a million twinkle lights as the stars glowed in the heavens as if fireworks exploded along with her pounding heart. Excitement flashed through her when she looked at Beau.


He glanced at her and his eyes were dark pools of gold. He smiled and all she could think about was his full lips kissing her  ̶  everywhere. He squeezed her hand, and she glanced down at the long fingers and anticipated their touch. All memories of the wild mountain man escaped her as they traveled up the dark, winding road that she knew would lead to his cabin. Their hideaway. His bed

Dark Secrets will be available in ebook format exclusively from Amazon this week.  The print book should be available shortly.

Posted by KRBailey, Author at 3:27 PM No comments: