It was about four o'clock in the afternoon on May 26, 1863 when a ragged, trail-weary party of six men decided to make camp beside a mountain stream. One man decided to pan for enough gold to buy some tobacco. What he discovered would prove to be one of the richest gold deposits in North America and would be a pivotal event in Montana history.

Within a year after that first pan of gold was found along Alder Creek, Virginia City grew to a population of 8,000 - 10,000 people and became one of the prominent cities of the Rocky Mountains. But by 1875, just a mere twelve years later, mining activity had greatly diminished and so had the area's population. Many of the mining camps were abandoned and Virginia City's population was less then 800 people.

I love old western ghost towns. I remember as a child visiting Virginia City, Montana, walking down the main street where the old buildings had been converted to shops and riding the stagecoach up to boot hill. When my husband took me back this summer, I was amazed at how different my memories from childhood were from what I saw. Now I'm not saying I was disappointed in Virginia City as it is today. It was just different than what I remembered. 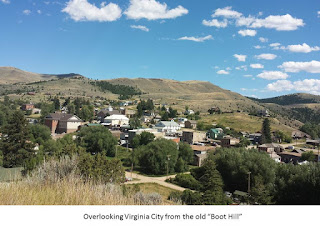 For one thing,Virginia City was bigger than I remembered. Talking to my Dad, it's what he remembered so obviously as a child, things felt different than what I see today. Homes are scattered along the main street and up over the hills surrounding the town. Some are still historic buildings. Others are residences where people reside today.

I remember the excitement of getting aboard an old stagecoach and riding up the hill toward boot hill. At that time -- at least from my memory -- it had many headstones. I remember walking through the old cemetery and reading those old headstones. Sadly, today, there are only five graves left on boot hill and they are vigilantes who were hung and buried there. After the outlaws were buried on Boot Hill, most of the residents preferred to be buried at the new Hillside Cemetery not far away. They even had the remains of their families moved from boot hill to Hillside because they didn't want to be anywhere near the vigilantes. I thought that was pretty interesting. 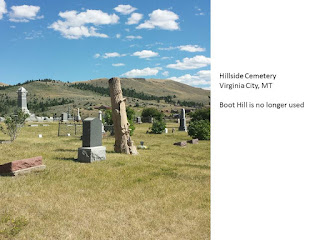 Hillside Cemetery sits on a hill with a rod iron fence and gate with rock pillars. I thought this was an interesting looking old headstone which stands out as I gazed across the Hillside Cemetery. 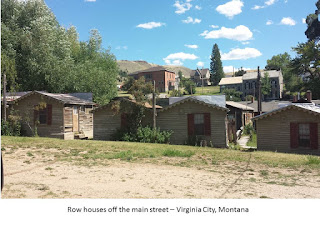 The actual buildings associated with many of these historic events remain preserved. In fact, I understand there are more 1860's buildings preserved there than found anywhere else in the west.

A man named Charlie Bovey fell in love with the unique history and charm of this area and began purchasing buildings and property in the late 1940's. He saved many buildings from demolition and decay.

Wow, so much history and I'm glad. It provides us with a glimpse into history that would be forever lost.

In 1898 the mining dredge boat arrived. 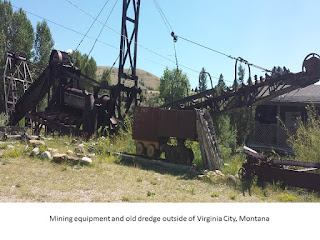 It was a mechanical marvel and became the first dredge to begin operations. Dredging brought new life to the area and continued until 1937.

As we drove into the area of Virginia City, there were big hills of tailings left over from the dredge operations. Again, these were something I don't remember as a kid, but the leftover tailings line the river. One sign said they found so many garnets that the valley became known as Ruby Valley. 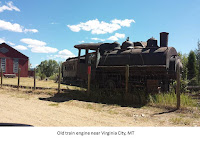 Another tidbit I didn't know was the trail between Virginia City and Bannock was rife with so many bandits that the trail became known as Vigilante Trail. 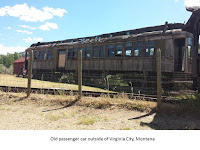 Just between Nevada City and Virginia City sits the remnant of an old train engine and passenger car. In 1964, a 1 1/2 mile railroad line was built linking the two cities.

I could go on and on about the interesting sights, but I'd urge you to take a trip to Montana and visit Virginia City for yourself.

Any while you are there, don't forget to stop and see Nevada City which is just 1 1/2 miles west. Charles Bovey collected many old Montana buildings and moved them to Nevada City where previously old buildings once stood. The town's original layout was retained. Today it is an outdoor historical museum with numerous artifacts and furnishings.

Take some time and go exploring. You'll be glad you did.

Thanks to the interesting websites "Legends of America" and "Virginia City.com". They provided me with much of the information I quoted above.